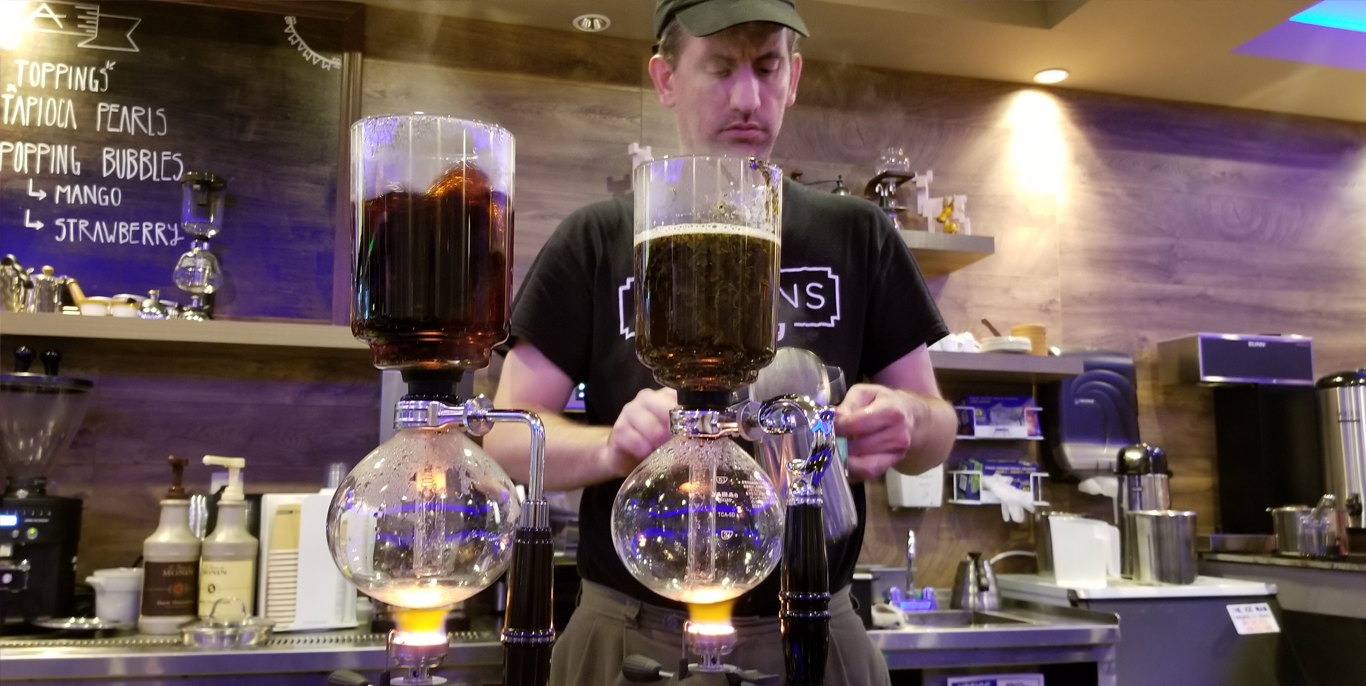 Seasons Coffee is one of the best specialty coffee places here in Jacksonville, not only we have various type of coffee making, our barista is the best in preparing Siphon Coffee in town.Walking into our coffee shop you will be surrounded by coffee fragrance and natural sweetness of our fresh bakeries.

To guarantee the flavor of real enjoyable coffee, we use only the best beans and our barista follows every steps of their training to produce a wonderful experience for your relaxing moment.

What is Siphon Coffee?

From Wikipedia, the free encyclopedia 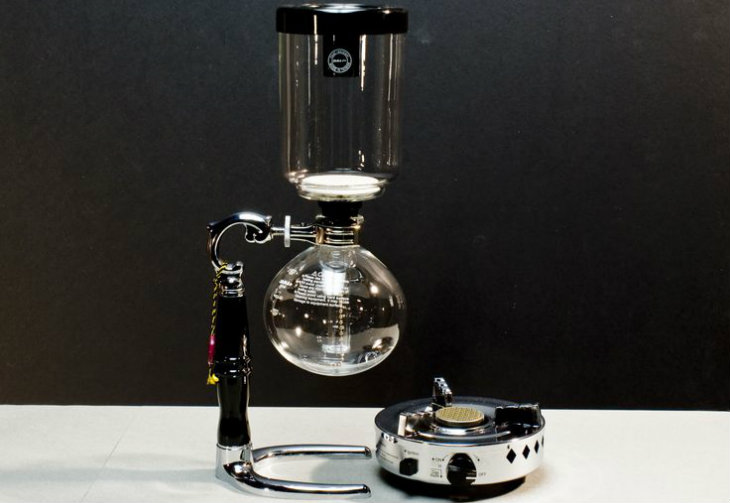 A vacuum coffee maker brews coffee using two chambers where vapor pressure and vacuum produce coffee. This type of coffee maker is also known as vac pot, siphon or syphon coffee maker, and was invented by Loeff of Berlin in the 1830s. These devices have since been used for more than a century in many parts of the world.[1] Design and composition of the vacuum coffee maker varies. The chamber material is borosilicate glass, metal, or plastic, and the filter can be either a glass rod or a screen made of metal, cloth, paper, or nylon. The Napier Vacuum Machine, presented in 1840, was an early example of this technique.[2] While vacuum coffee makers generally were excessively complex for everyday use, they were prized for producing a clear brew, and were quite popular until the middle of the twentieth century. The Bauhaus interpretation of this device can be seen in Gerhard Marcks‘ Sintrax coffee maker of 1925.[3][4] 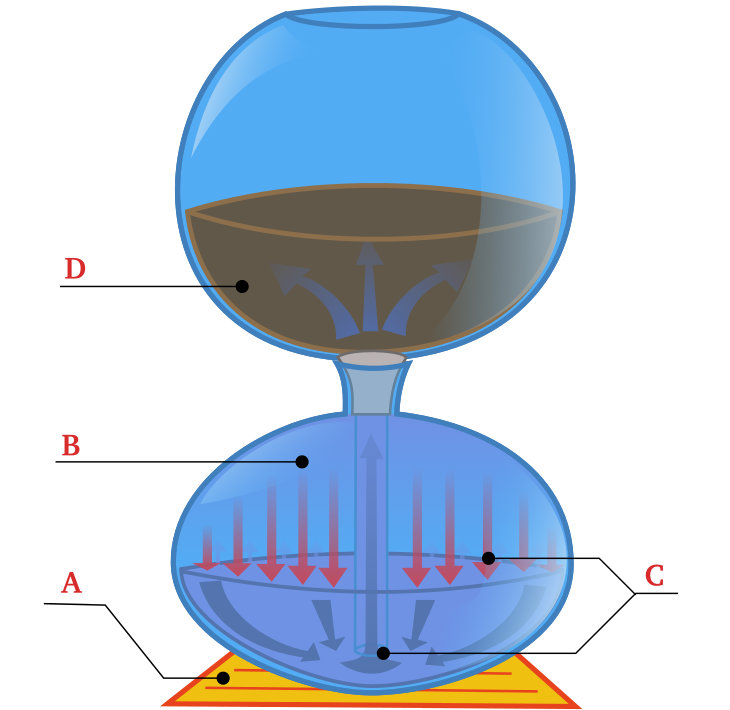 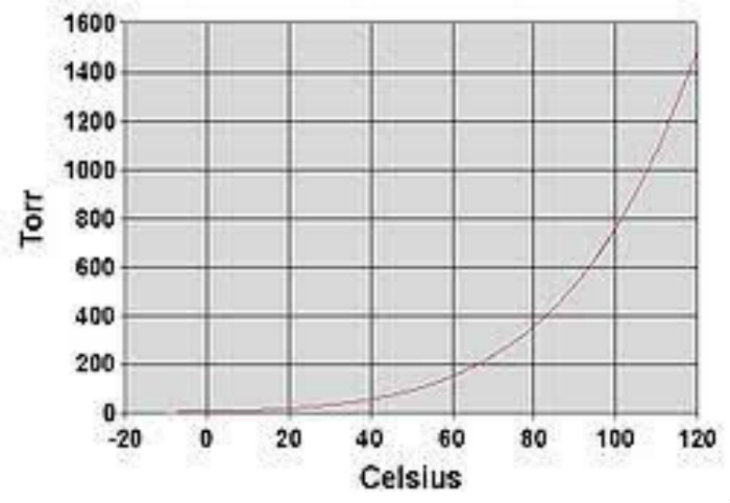 A vacuum coffee maker operates as a siphon, where heating and cooling the lower vessel changes the vapor pressure of water in the lower, first pushing the water up into the upper vessel, then allowing the water to fall back down into the lower vessel. Concretely, the principle of a vacuum coffee maker is to heat water in the lower vessel of the brewer until expansion forces the contents through a narrow tube into an upper vessel containing coffee grounds (as water temperature increases, dense liquid water increasingly converts to less dense water vapor gas, which takes up more space and thus increases pressure); when the water reaches and exceeds the boiling point (so the vapor pressure equals and then exceeds atmospheric pressure), the (water vapor) pressure in the lower vessel exceeds the (atmospheric) pressure in the top vessel and water is pushed up the siphon tube into the upper vessel. During brewing, a small amount of water and sufficient water vapor remain in the lower vessel and are kept hot enough so the pressure will support the column of water in the siphon. When enough time has elapsed that the coffee has finished brewing, the heat is removed and the pressure in the bottom vessel drops, so the force of gravity (acting on the water) and atmospheric pressure (pressing on the liquid in the upper vessel) push the water down into the lower vessel, through a strainer and away from the grounds, ending brewing. The coffee can then be decanted from the lower chamber; the device must usually be taken apart to pour out the coffee.

The iconic Moka pot coffee maker functions on the same principle but the water is forced up from the bottom chamber through a third middle chamber containing the coffee grounds to the top chamber which has an air gap to prevent the brewed coffee from returning downwards. The prepared coffee is then poured off from the top.

An early variation of this principle is called a balance siphon. This implementation has the two chambers arranged side by side on a balance-like device, with a counterweight attached to the heated chamber.[citation needed] Once the vapor has forced the hot water out, the counterweight activates a spring-loaded snuffer which smothers the flame and allows the initial chamber to cool down thus lowering pressure (creating a vacuum) and causing the brewed coffee to seep in.

Text is available under the Creative Commons Attribution-ShareAlike License